Happy New Year to everyone.

Yesterday I wrote about Asian supermarket and hungry spirit.  Today, I went to a Japanese shopping mall in Toronto.  I didn’t know there is such a place in Canada. Interestingly, a Taiwanese Canadian friend of mine let me know it.  I was impressed.  If someone was watching me, it must have been weird; I talked to myself, shook my head and said “no, no, not now, not yet”.  Why?  For me, real Japanese food should be reward for achievement, except for some limited usage and for special occasions.  Limited usage includes seasonings, soup stock and such.  Special occasions include showing real Japanese food to my Canadian friends and Japanese-related events like New Year’s Day.  Achievement?  It varies, from completing a school project, finishing a school term, and… OK, this is the point.  The achievement I am expecting myself is to get a design job in Canada.  It includes becoming a successful freelance designer.  This is why I told myself “no, not yet”.

Someday, I will have real Japanese food as much as I want. 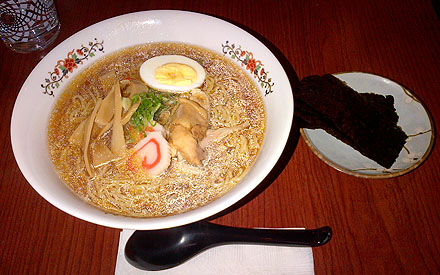 Tokyo Olympic was held in 1964.  Japanese athletes won many medals, and it was not solely because it was a home game.  Japan was defeated in WWII in 1945, and lost everything.  Then they (let me use “they” instead of “we” because I was not born yet) gradually recovered, and in 1956, Japan declared “it is no longer a post-war period”. And then Japan experienced the rapid economic growth.  Still, Japanese athletes had hungry spirit.

Recently I went to an Asian supermarket in downtown Toronto.  I used to go to the same supermarket in Calgary when I was a U of C student, but something was very different. When I was a student in Calgary, I did not have stable income and buying imported Japanese food was “luxurious shopping”.  By doing it, I encouraged myself to work (“study” for students is “work”) harder.  But now, what is it like to go shopping at an Asian supermarket?  What am I hungry for?

As I wrote in a previous post, I am often too busy to think of my future although I will have to look for a new job after April.  Recently I had a good opportunity to talk with friends who are looking for a job, in a way, like me.  It was good to share thoughts and to see someone like me from a different perspective.  I should remember hungry spirit, like myself in Calgary, or like the Japanese athletes in Tokyo Olympic.

Yesterday I was invited to a Christmas dinner in my former place in Hamilton.  When I rented a room on the third floor and was invited by the landlord to a dinner, I went down the stairs.  Yesterday I entered the house from the main entrance.  I felt something was very different, but once I entered, it is the place where I have fun.

It is good to have a place to come back.  Compare the photo with the one that was taken on Thanksgiving Day.  It is good to meet friends and new people. 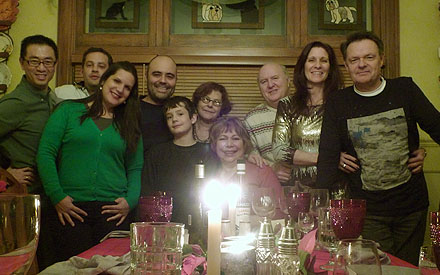 The world was supposed to end at 6:12 am Eastern Time this morning.  But fortunately or unfortunately, it did not.  Instead, today was the last day of the work this year.  It’s been a month and half since I started the current contract job.  So far so… good?

As I wrote in some posts before starting this job, I was often discouraged.  I feel better now for some reasons.  One of the reasons is that the job is more interesting than I previously expected.  Now I work in a technical field that I had never imagined I would work in: a mixture of material engineering, structure engineering, electric engineering, and construction.  If I lived as I expected, I wouldn’t have experienced working in these fields.  Talking with engineers is not only annoying (oops!) but also interesting; they have different expertise and different perspectives.

I must admit that I feel less discouraged now because I am too busy to think of the future.  But the fact is still the same; I will need to find another job after April next year. I will have nearly two-week holidays.  Let’s use this opportunity to rethink of the future plan.

Another reason is that I am gaining work experience in Canada which I need to get a desired job.  Doing a temporary “easy” job is not bad.

Yesterday I met a Japanese industrial designer who works for a design firm in Toronto. I got to know her in LinkedIn; she is a friend of friend of mine.  It’s good to talk with people who work in the professional design world.  She talked about her job, and it was different from what I imagined in some ways.  It gave me a hint for my future career path.  I have a lot to talk, but let me pick up a couple.

It’s good to talk with people who have something in common.  She now works for a design firm, but not sure if she will keep working for the company or not for some reasons.  She is still looking for her career path, in a way, like me, though she is ahead of me.  There are two types of people; those who talk about their goal and those who take action on their goal.  I’m encouraged when I see people who strive to reach their goal.

This is the first time when LinkedIn worked for me.  I visited some design company’s pages, and when I visited the design firm’s page, I found she was in my 2nd connection through a former classmate of the Industrial Design program at U of C.  I know that meeting her does not directly get me hired by a design firm, but it’s good to make connections in the design world, and this is one of the functions of LinkedIn.

To be honest, I’m often too busy to think of my future career in these days.  Meeting designers makes me keep running for the dream job.

Orillia is a small town.  Life here is not exciting, but relaxing.  I wish I lived here in summer.  Many people say it is beautiful in summer, but unfortunately, the current contract job is until the end of March.

One of the good things to live in a small town is that you can see many stars in the clear night sky.  I used my Lumix the point-and-shoot camera and the quality of the night sky photo below is not good, but in fact the real night sky is way more beautiful.  This is what living in a small town can be. 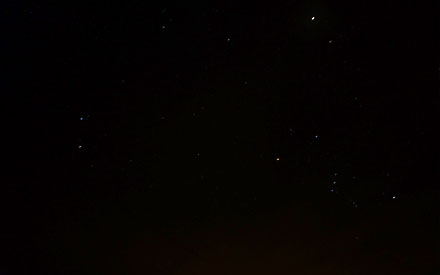 Probably one of the reasons is the history.  Canadians, as described as cultural mosaic, embrace diversity.  Let me assume I do not need to explain the reason.  On the other hand, Japan is, to make a long story short, composed of one ethnic group except for the Northern part and the Southern part for complicated historical reasons.  (A large number of Koreans migrated to Japan a few thousand years ago, but their offspring are considered to be Japanese today.  Probably I am one of them.)  Therefore, Japanese people are generally conservative and do not accept diversity.

For other unknown reasons, when Japanese people find two different things, they, probably unconsciously, try to judge which is right or correct and which is wrong.  This is one of the reasons why I prefer living in Canada to Japan.  When I do something different from what the majority of people do, Japanese typically say “you are wrong” while Canadians generally say “that’s different”.  Canadians have more acceptability. Probably they are more adaptable.

Perhaps one of the reasons of their reaction is my stance.  For Canadian colleagues, I am a counterpart who gets closer to them.  On the other hand, for Japanese coworkers, I am a fellow who stands on the other side.

Anyways, this is more interesting experience than I had previously expected.  Now, let’s enjoys this.

If you have seen Lost in Translation, you probably remember the iconic scene of the movie.  That is mostly because of the translator’s inability, but similar things happen in my work place for a different reason.  Here is typical conversation between my Japanese coworker and Canadian colleague through Hiro the translator.

Canadian Engineer (CE): When are you going to do this task?

Me: After finishing that job.

CE: When will it be?

Me: The beginning of  next week.

If you read the English part only, it is quite a short conversation, and it is all the Canadian engineer needs.  But if you ask Japanese people “when” or “what”, they answer “how” and/or “why”, and never get to a point unless someone reminds them of the original question.  This is quite common in Japan.  Why?  I don’t know.  For some reasons, I feel uncomfortable when people talk in this way, but most Japanese even do not wonder why they do it and why some other people feel uncomfortable.  Seriously, this is one of the reasons why I prefer living in Canada.

On Thursday, my Canadian colleague invited our Japanese coworkers to his place to serve venison.  As I anticipated and wrote in a previous post, those Japanese engineers stay at a hotel and do not hang out.  Technically, it does not matter because they came to Canada on business.  But they are missing something.  The Canadian colleague knew it, and invited them to his place.  When we were waiting for the meal, his neighbors joined us, and it turned out to be a big party.  Those Japanese were surprised at and impressed by Canada’s small-town hospitality.  Even in the party, I served as a translator, and this is what I expected; bridging the gap between Japanese culture and Canadian culture.  I wished it was a Friday night, but it doesn’t matter when. It’s always a good time then.

On Friday, I brought the Japanese coworkers to Montana’s to let them experience Canadian dinner out.  Unlike having a meal at food court, ordering dinner at a restaurant is a difficult task for those who can speak very limited English.  For this time, they were surprised at and impressed by the volume of typical Canadian dinner.  I was the only one who ate up all the meal.  Am I becoming Canadian???

Today?  I just slept a lot.  My body seemed to need some time to digest everything I had in last two days :p