In a previous post, I wrote about corporate culture based on the Toyota’s recall case.  In the post, I discussed communication among different engineering teams, and wrote “Now I imagine how they have established the system.  Did anyone take initiative to communicate among development teams?  Or did anyone establish a system to share information among different teams whether or not they are willing to communicate?”. Recently I found an internet article that shows a case in which the latter system does not work.

Probably many people know the nightmare of Boeing 787 Dreamliner.  I found an internet article that introduces insight into it.  Boeing outsourced the majority of engineering and construction of the plane, expecting it would reduce the development cost and time.  But the result was totally opposite.  To make a long story short, Boeing could not manage communication with and among partners.  According to the article, Boeing adopted, or at least tried to adopt Toyota’s outsourcing system.  But they only superficially adopted the structure of the system and did not lean the culture.  Boeing introduced a web-based communication tool to share information with partners, like I imagined as in the previous post, and it failed.

Now I am sure about two things.  First, communication among engineering teams is not easy.  Second, copying a system does not work unless the corporate culture is understood and introduced appropriately.  Probably I will face situation like this in some degree in the future.

As I wrote in a previous post, I bought a car.  Was it a good choice?  I still don’t know.  I mean, I chose a good car, but don’t know if buying a car was a good choice or not.  As I wrote in the post, I seriously thought of environmental impact when I decided to buy a car.  But this internet article about “dis-ownership” points out another critical issue; people choose sharing over owning not because it is “green” but because it saves money, as the article goes “the new status symbol isn’t what you own–it’s what you’re smart enough not to own”.

Of course I knew it when I bought the car, and now I know it as reality.  It costs.  What compensation do I get?  Time.  Is time money?  Yes, sorta.

I agree with the author of the article; when I was in Japan and spent more than an hour to commute by public transportation, I read a lot of books.  But it does not work here in Orillia.  Before I bought the car, I used bus to go to work, but I spent less than 10 minutes on bus and spent way more time on walking and waiting for a bus, i.e., I could do very limited things when commuting such as briefly checking internet news on my Blackberry.  Now, with the car, I have more time to do more things.  I bought time.

As I wrote in another previous post, I spent more than a week in downtown Toronto, and did not use my car a lot there.  Probably in some cities, sharing is a better and smarter choice than owning.  This raises another question.  How can more cities be smarter ones?

Today I used bus to go to downtown to look for a hair salon; I expected I would walk around to find one in downtown where parking is limited.  And I ended up choosing one with parking in front.  Oh well.

As I mentioned in a previous post, Japanese people are generally conservative, and some (many?) of them do not like foreigners.  Some of them openly tell that they don’t like foreigners without hesitation.  I don’t like them because I know what it is like to live in a country as a foreigner.  Some others are, of course, nice to visitors from foreign countries, and I like them.

One of my Canadian colleagues went to Japan to take training.  When I met him, he talked about his experiences in Japan, and proudly told me that a Japanese colleague invited him to a family BBQ.  It was good to know that some Japanese treat visitors from Canada very nicely.  Last week, a Japanese engineer came to Orillia to install some equipment and provide training to a Canadian lab technician for a couple of weeks. Yesterday, the Canadian colleague invited me and other Japanese visitors to his place to dinner at his place, and I found that the new Japanese engineer is the one who invited the Canadian colleague to the family BBQ.  Probably he wanted to treat the Japanese gentleman as he did in Japan.  Isn’t it nice?

I spent 11 days at my friends’ place in downtown Toronto during the Christmas vacation to take care of their dog while they visited their parents’ place in Calgary.  The photo below was taken from their room.  Now I have spent a little more than a week in Orillia since I came back from Toronto.  I ask myself; which is better to live, urban area or rural area?  As I mentioned in a previous post, Toronto is not a favorite city to live for many people, but I actually enjoyed staying in the core of downtown Toronto.  Many things, almost everything you need in your daily life is available near by.  In Orillia, I use my car almost daily.  When I was in Toronto, I usually walked and used public transportation, and even missed my car because I used it only once in a few days.  And of course, Toronto is generally more lively, exciting and inspiring than Orillia for many reasons.  I found one authentic Japanese food restaurant, and there must be a few more.  So, is urban life more suitable for me?

However, interestingly, a day after I got back to Orillia, I felt like walking in downtown Orillia, which is even smaller than downtown Hamilton or Kensington Street in Calgary, where most buildings only have two stories.  I actually liked it.  Honestly speaking, I did not enjoy living in Hamilton; it is not big enough to be sophisticated and not small enough to have hospitality.  I like the small town’s hospitality in Orillia, which I did not find in Toronto.

So, which do I prefer???  Anyways, let’s see what job I get after April and where I will go.

In Canada, people send Christmas cards to their friends, and spend Christmas Day with their family.  On the other hand, Japanese people send New Year’s greetings cards to their friends, and spend New Year’s Eve and New Year’s Day with their family.  As I have both Canadian friends and Japanese friends, I combined two cultures in the illustration below.  In Japan, people typically use the Oriental Zodiac of the year on New Year’s greetings cards.  The year 2013 is the year of Snake.  Daikokuten is one of the Seven Lucky Gods of Japan.  He carries a big sack and brings wealth. …I know this is kitsch, hope you understand and enjoy it. 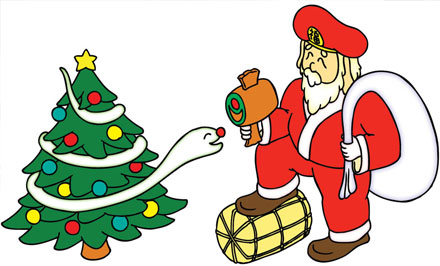 I with everyone good luck for the year 2013.