For some people, there must be a pragmatic reason for everything. I still cannot forget a question that my coworker asked me about two decades ago. I like motorcycle, and he asked me “why do you ride a motorcycle? You cannot carry a load.” Whatever I explained, he never understood I simply enjoy riding it. For him every vehicle is a tool to move from one place to another and carry a load. For another example, as I wrote in an old post, coffee is something to make “efficiently” for someone. By the way she drinks a glass of red wine everyday for her health. Wine is not something to enjoy but a kind of supplement for her. Those two people must be extreme examples, but for some other people it seems difficult to understand that everyone has different preference and that people often spend time to enjoy something that doesn’t seem practical or efficient for other people.

What I did last weekend maybe difficult for those people to understand, though I strongly believe the majority of people understand it; I made a day trip to Toyokawa, Aichi prefecture, to watch Sakura (cherry blossoms) and to visit a Buddhist temple. It took about an hour and half from my place to Toyokawa by train, but it was worth visiting.

花見 –hanami– is a Japanese culture that literally means “watching blossoms (flowers)”. Generally it means having a party (picnic) under cherry blossoms, but taking a walk under cherry blossoms can be hanami as well. What I did in Toyokawa was the latter one. I wanted to go there by myself, and one of the reasons is that I wanted walk slowly at the Buddhist temple. If I go there with other people, they walk at their pace and as a result they rush me, as I wrote in a previous post. Another reason is that I just wanted to feel easy. Picnic-type hanami is often tough especially at a popular hamani spot; you have to go to the spot way ahead of time to hold a space in a crowd, as depicted in this TV commercial. But what I saw in Toyokawa was unexpectedly peaceful. 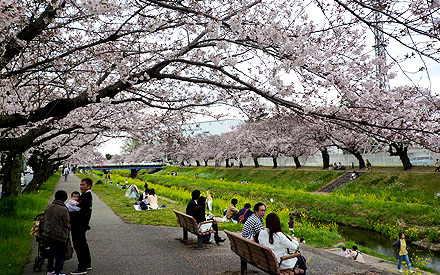 Some people had picnic on the spacious bank of Sana river. Some people took a walk on the path, including myself. Whether you had a picnic in a crowd or take a relaxing walk, time passes anyways. If you do something “efficiently”, you may be able to do more in a limited time. But I prefer forgetting the time.

In this day trip I also enjoyed visiting a famous Buddhist temple called Tokokawa Inari. I admit that I’m not a pious Buddhist. I’m not a pious Shintoist either. But I like visiting shrines and temples. Those are places where I forget about busy daily life and remind myself that I am still human. I also enjoy being in tranquil scenery. 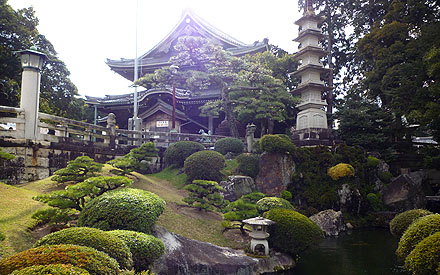 When I went to Canada for the first time, I didn’t know any Japanese there. When I went drinking with my Canadian friends, I always went to a bar. It’s just as usual for me. But typical Japan in Canada usually hang out with Japan, go to fake Japanese restaurants or other Asian restaurants, and never go to a bar. I like to enjoy things of the place, but they are missing something.

Now I live in Japan, and don’t want to miss a thing. I will eventually go back to Canada, and this situation makes me see my home country’s culture in a different way from before. Last weekend I made a day trip in Nishio, Aichi prefecture. Nishio is famous for 抹茶 – matcha, or powdered green tea. 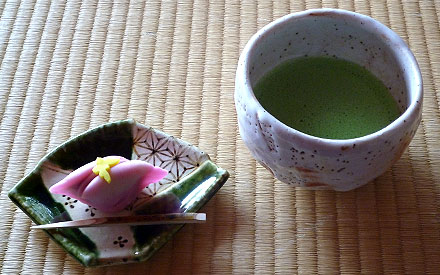 They are also proud of Nishio City History Park. There is Nishio Castle in the park. Unlike Inuyama Castle that I visited last month, the castle tower was rebuilt recently. But unlike entertaining Nagoya Castle, its original state is precisely represented. 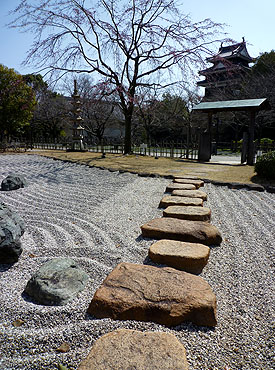 I can tell it’s not “authentic”; on the surface of a thick beam, unlike the one in Inuyama Castle that impressed me, I can recognize evidence of machining. But I still admire people’s efforts to restore our historic heritage. They don’t want to miss something important. 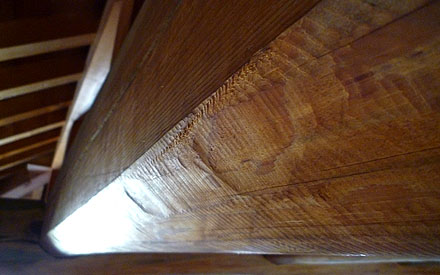 Another remarkable featured in the park is a tea house called 旧近衛邸 – Kyu-Konoe-tei. The building is beautiful, and the garden is very beautiful too. The way of serving tea is very, very different from Western style. Probably Westerners and many other non-Japanese find this pretty uncomfortable. We Japanese (…not all Japanese, though) enjoy this way of having tea, combined with the beautiful view outside. But do not assume this is typical in Japan. This is in fact rare and only recently I came to enjoy having matcha in this way. Now I don’t want to miss something old but new for me. 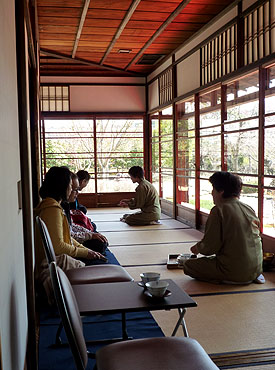 It’s been a little more than two months since I got back to Japan. Though I was not willing to coma back, it’s good to enjoy living in my home country.

In February, I visited 犬山 (Inuyama). One of the main destinations of this day trip was 犬山城 (Inuyama Castle). 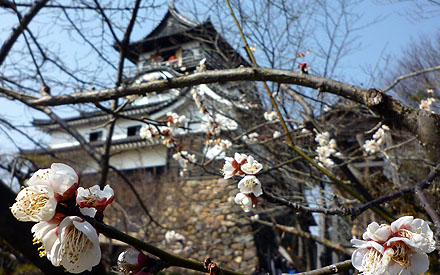 So, I visited two castles in Aichi prefecture in two moths, and there is a big difference between them; the tower of Inuyama Castle is the original one, but the tower of Nagoya Castle was rebuilt about half a century ago. In other words, the former is authentic, and the latter is not. I’m not saying that rebuilding a castle tower is not good. The tower of Nagoya Castle was burnt out in an air raid by U.S. in WWII, and I actually admire their efforts to rebuild a historical treasure. But it’s a little too entertaining. It is equipped with an elevator, and there is a souvenir shop on the top floor, which disappointed me.

On the other hand, I was so impressed by Inuyama Castle. For example, a beam impressed me though it is not a significant feature of the castle. On the surface of the beam, I can see the efforts that people made about 500 years ago; people planed a piece of lumber with hand tools of the time.

For another example, again, though it is not anything remarkable, I noticed the age of the castle on the floor; it has been polished by people… by the samurai in the past, and today by the tourists. 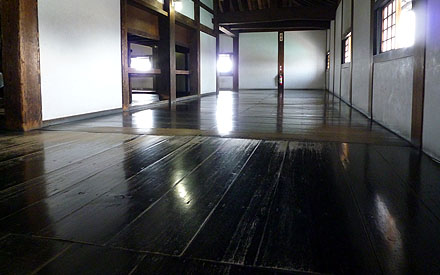 When I visit a museum or a historical site, as I wrote in an old post, I always spend a long time… I mean, I “usually” spend a long time. I often visit a historical site with my friends, and when they walk at their pace, they “rush” me as a result… This is why I prefer visiting those places by myself. Anyways. It’s not about watching famous art works. It’s not about taking selfies at a popular site. It’s about feeling people’s life in the past. I feel I am communicating with people in the past through authentic pieces of whatever.

By the way, I wrote I was disappointed by the tower of Nagoya Castle, but it does not mean I don’t like Nagoya Castle. In fact, I enjoyed seeing the stonewalls, for example. They were not burnt out by the air raid; it’s real. It’s not tough to imagine it was hard work, and people did it by hand. 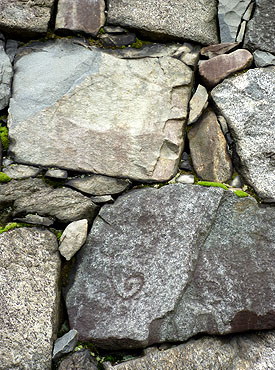 Anyways, I want to keep my resolution. Of course “sight seeing” cannot be a “resolution”. It’s not only about visiting sites but witnessing the history of my home country. In a way, my resolution for last year still continues; to ignite my intellectual curiosity. I will eventually go back to Canada. While living in Jaapan, I want to take this opportunity to lean more about my home country to be proud of it.