Home » A day in my life » Business as usual

It’s good to start a weekday morning with a cup of carefully brewed coffee with a ceramic coffee dripper. Why can I afford this? Because I was laid off yesterday morning. Since a long time ago we had been aware that “some” people would be laid off. On Monday this week, we got to know that it would be 108 people and a list of 96 of those was posted right away. In Wednesday morning, I was told in person that I was one of the other 12. Some tens of minutes later, I was at home. It’s just business as usual.

Did what didn’t kill me make me stronger? As I often mention, I know that no one reads this blog and I write this for myself. It’s good to know what I though and felt in the past. I remember that I wrote what I felt when I lost a job in an old post, and read it again now. At that time, I was so depressed. So far I am not that much depressed but I don’t know whether it is because I know that unemployment does not kill me or because I am now taking time to accept the reality. Whichever the reason is, I will start looking for a new job again anyways. Why not right now? Because I need rest for now.

Yesterday right after being sent home, I decided to go to my favourite place in Toronto, ROM, Royal Ontario Museum, instead of being depressed at home. As I wrote in a previous post, ROM is one of places where I can find I am still myself. Being unemployed is not a good thing, obviously, but this could be a good period to think of myself. One good thing now is, as I wrote in another previous post, that I can see the vast sky with little obstacle from my room, which is very different situation from when I was unemployed in the past, although the rent is not kind for a guy without a job.

After visiting ROM, I walked around the water front, and found this view. 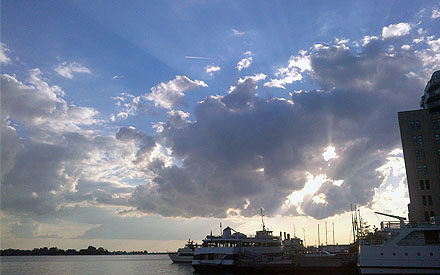 What I thought of then is an old Japanese song that I mentioned in an old post, which goes;

I hope everything will work out someday. Fingers crossed.

A day in my life
October 8, 2015Hiro ShibataPermalink Leave a comment