Nearly three years ago I wrote about my old-fashioned manual coffee grinder. Now it is more than ten years old, and cannot grind coffee evenly. I don’t think I will throw it away even if it does not work properly because I have developed attachment for it. It is actually one of two manual coffee grinders I brought from Japan, and today I cleaned the other one, which is more “stylish” and has not been used as much as the old-fashioned one, to use it from now on. I need a manual coffee grinder to brew a cup of coffee which satisfies me.

My passion for coffee dates back to my young adult days. It was when I had worked for my first company for about a couple of years. One day, I was going to have a small party with my university friends after work. We were meeting at a train station, but in those days we did not have google map and could not estimate travel time accurately. When I got to the train station it was still too early and I had to kill time. In Japan, in front of or around every major train station, there is shotengai, which is usually translated to “shopping street” in English. But typical shotengai is different from what people in North America imagine from “shopping street”; it is usually a busy place, streets are typically narrow, they rarely sell luxuries but mainly sell commodities, and shops are generally not stylish. At the train station, I thought there might be a coffee shop or something to kill time in the shotengai, and walked around there. After a while, unexpectedly, on the second floor of a small building I found a sophisticated coffee shop which did not match the shotengai atmosphere. It did not need to be an elegant place only to kill time, but I was interested in the fine-looking cafe. I went upstairs and took a window-side table. There was a couple of university students near me, and they were talking like “is it really OK for us to be in such a nice place? Can we afford this?” At that time I was a working adult dressed in a suit and quietly thought “I can afford this”. The coffee they served were more expensive than typical ones, and I found the price “reasonable”. It tasted so good, and gave me a nice feeling. Then I looked down outside the window. There were busy people walking on the narrow street. Suddenly they looked like a bunch of emotionless poor people to me. But the fact is that I was only one of them until several minutes ago. I asked myself “what makes me different from them?” Then I thought “does this cup of coffee makes me different from them?” The answer is “no”, obviously.

At that time I could not find anything special that made me myself. When I graduated from my university and started working for the company, I had a sort of future vision. But as a couple of years passed by, I gradually became aware of the gap between the vision and the reality. Since the moment when I though for one second that a cup of nice coffee makes me different from other people, I had thought what I could really do to retain myself. Eventually I decided to go to a developing country to do a volunteer job, and ended up coming to Canada to pursue my dream job. Since that moment, coffee has been something special for me.

Now what? It’s been a week since I was laid off, but I still have no concrete strategy for job hunting. I might be taking time to accept the reality, but one week must have been enough. I know that when doing helpless job hunting it is so easy to lose myself. Let’s sit back and think of it, with a cup of nice coffee in my room. I may need to recall the feeling I had in the elegant coffee shop, but what I see outside now is not a crowd of people but the sky, like this. 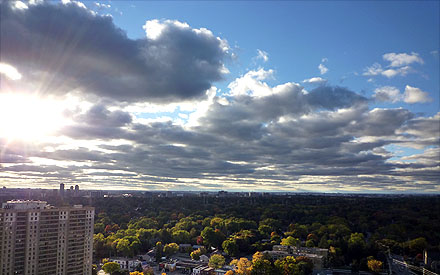