This is the third time to come back to my home country after having lived overseas for years: first, after living in the Kingdom of Tonga for two years, and second, after living in Calgary for four years and half. I’m always surprised at some things after coming back. One of those things is people’s face. When I was young and didn’t imagine I would live overseas, some people said that Japanese people look emotionless. I thought “come on! do people outside of Japan always smile or show anger?”, but now I know what they meant. When I was working in Tonga, especially when I was concentrating on something, my Tongan coworkers often asked me “are you OK?” I always said “yes” and thought “what do you mean? I’m OK as usual!” After coming back to Japan, I wanted to ask everyone “are you OK?” because they looked so emotionless especially when they are commuting. It was a weird feeling. I understood that I often looked, or in another word behaved, like typical Japanese when I was working in Tonga. However, sadly, I eventually came to feel nothing about that because I had become merely one of them.

Recently I wrote about my memory of coffee, in which people on a busy street suddenly looked like emotionless people to me after having a cup of very nice coffee. As I mentioned in the post, it happened before going to Tonga, when I didn’t understand that Japanese people generally look emotionless. Probably, now I think that, the cup of coffee freed me from daily concerns and made me a “normal” person just like coming back from overseas.

Now, which side am I on? Which face do I have? It’s been five days since I came back. Some people look emotionless to me, but the feeling is not as strong as when I came back from Tonga or from Calgary. It’s quite easy to guess why; I had been working for a Japanese company in Canada where some people expected me to work like Japanese, then I was laid off and many frustrating things happened in last few months. Furthermore, I will start a new job in Japan from next week, and I don’t know what it will be like. Honestly, I don’t have a good feeling. But as I often write, what I feel or how I take the situation at the time depends on how I see it. I know it is easy to say but hard to do, but what frees me from daily concern is not a cup of nice coffee but how I see everything. Oh, wait, can this be next year’s resolution?

Of course, coming back to Japan is not necessarily a bad thing. One of good things in Japan is food: not like typical fake Japanese food in Canada but real ones. Even OK-quality typical restaurant food at the airport, as shown below, was good to me. I was even excited by that. 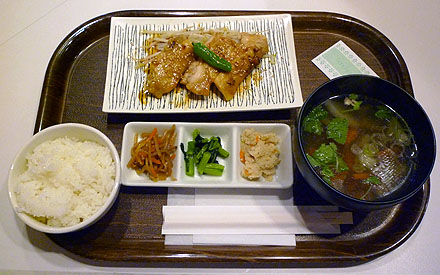 OK, food shouldn’t be the only good thing about Japan. Let’s look for more good things that would help me to free myself.