Oops! I found I have not updated this blog for a month!

Many things have happened. As I mentioned in a previous post, I often loudly tell myself “I forgot that” when I have left my workplace and get on my car. It works, or at least, it worked. But recently those things occupies my capacity to think even after leaving the workplace, which disables me from doing anything non-urgent (including blog).

In past one month, I have thought of many things. One of the biggest is March 11th; it was this day three years ago when massive earthquake and subsequent tsunami hit Eastern Japan. It is generally not good memories, but something I should not, will never forget. I still remember some mixture of feelings: feeling of helplessness, anxiety, fear, and feeling of unity. As I wrote in another previous post, some things evoke the feelings even now. It is kind of good. As I wrote in that previous post, income often hides unwanted reality. What is unwanted reality?? As I wrote in the previous post, life is uncontrollable, and probably I should accept that being unstable is “normal”. It is kind of good to remember the feeling of helplessness to get ready for the next helpless period. Who knows?

Let me go back to the story of leaving the workplace. Yesterday, when I got on my car, I repeatedly told myself “let’s forget that. I forgot that”. When I was driving after that, I was no longer thinking of details of what happened in the workplace, but still had not-good feelings. Then I decided to drive to a park on lake Ontario and walk around. It was chilly and cloudy; it was not a good timing to walk around. But, though it was only for a short time, it’s good to remember something I have forgotten: a peaceful moment. As described on its web site, it is home to a variety of wildlife. I did not hear any artificial noise. I only heard birds singing. I had forgotten peaceful moment like that. 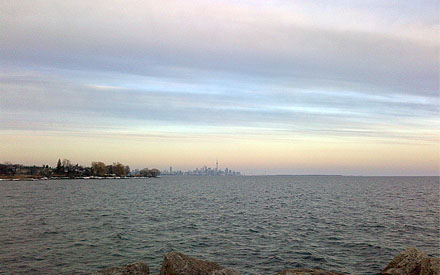 I will move to an apartment two weeks from now. Honestly, I dislike the current room. I moved to the current place when I could not get a job after ending the temporary job in Orillia, so I chose a cheap place, which is small, dirty, and noisy. A folding chair is the only place where I can sit back. The new room is on the 30th floor of a 36-stories tower. It’s quiet, and the view from the balcony is great! I’m hoping it will be my peaceful place. Oh, one more thing to hope; I hope my life will be stable. Let’s see.