Home » A day in my life » Third attempt failed. Am I lucky?

It’s always good to visit Niagara Falls. It looks differently in different seasons. It’s good to visit there with people who enjoy the scenery while some people take a glance at the falls and go home. Today I visited there again, but not for pleasure. I needed to go to the border service agency to extend my stay in Canada as a visitor. I parked my car at the agency, walked to U.S. and walked back to Canada to re-enter as a visitor. 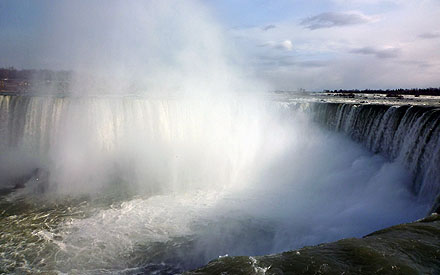 I applied for permanent residency early this year, but one document expired before the immigration office makes a decision and I turned out to be ineligible because of that. I was informed of it yesterday. It’s a long story but I have been in “implied status” to legally stay in Canada, and becoming ineligible means that I have to leave Canada immediately. Since I am not ready to leave here right now, I chose to extend my stay as a visitor. This does not mean I cannot be an immigrant. Actually I can re-apply, and I’m sure I will do it soon after settling down in Japan.

This was my third attempt to apply for immigration to Canada and the next one will be the fourth. When I graduated from the University of Calgary, international students were allowed to do job hunting for only three months after graduation, and it was not long enough for me. After going back to Japan from Calgary, I applied for immigration as a skilled worker, but my skill was not “good enough” to be an immigrant. I don’t know why it is so difficult for me to be an immigrant in Canada, but I’ll keep trying anyways.

Now I think I was laid off by the uncivilized company at the right time. Leaving a company is always tough as I have experienced several times in the past. If I was not laid off, I would have had to leave the company from myself and might have left negative impression. And more importantly for me, I wouldn’t get compensation from the company. As I wrote in the previous post, layoff could be a chance to release me from a demanding life. I’ve lived on compensation for nearly two months, and since I’ve been in “implied status” which prevents me from getting a job, I couldn’t do serious job hunting but rather spent time on reconsidering what I have done from a different perspective as I wrote in a recent post, and focused on mindful living. Life is really unpredictable, and I’ve never thought of this scenario.

I’m lucky, so far. Whether I am really lucky or not depends on what will happen next, but I shouldn’t try to predict it. One good thing is that I feel I’m more receptive to unexpected events than before. Instead of trying hard to predict the future and prepare for it, I will try to retain this state and improve my flexibility, which is easily forgotten when things go as expected. I’m lucky to be unlucky.

As I wrote at the beginning, it is good to visit Niagara Falls with people who enjoy the scenery. Visiting there alone is not fun, but one good thing was nobody rushed me (seriously, some people rush others after taking a glance at the falls). I’ll come back and visit there again, though I don’t know it will take half a year or a year. Let things happen, and we’ll see.

A day in my life, Just a thought
November 23, 2015Hiro ShibataPermalink Leave a comment